Estimated probability plot for ventricular fibrillation episodes at different concentrations of particulate matter of less than 10 μm (PM10) and less than 2·5 μm (PM2·5) in aerodynamic diameter. 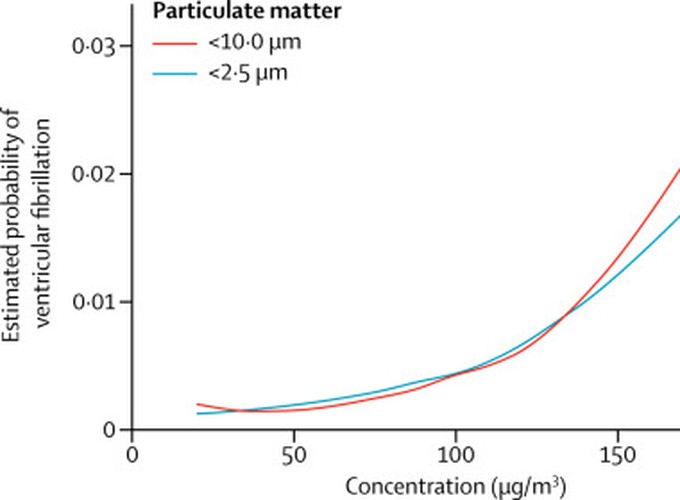 Estimated probability plot for ventricular fibrillation episodes at different concentrations of particulate matter of less than 10 μm (PM10) and less than 2·5 μm (PM2·5) in aerodynamic diameter.

Background: Although the effects of air pollution on mortality have been clearly shown in many epidemiological and observational studies, the pro-arrhythmic effects remain unknown. We aimed to assess the short-term effects of air pollution on ventricular arrhythmias in a population of high-risk patients with implantable cardioverter-defibrillators (ICDs) or cardiac resynchronisation therapy defibrillators (ICD-CRT). Methods: In this prospective multicentre study, we assessed 281 patients (median age 71 years) across nine centres in the Veneto region of Italy. Episodes of ventricular tachycardia and ventricular fibrillation that were recorded by the diagnostic device were considered in this analysis. Concentrations of particulate matter of less than 10 μm (PM10) and less than 2·5 μm (PM2·5) in aerodynamic diameter, carbon monoxide, nitrogen dioxide, sulphur dioxide, and ozone were obtained daily from monitoring stations, and the 24 h median value was considered. Each patient was associated with exposure data from the monitoring station that was closest to their residence. Patients were followed up for 1 year and then scheduled to have a closing visit, within 1 more year. This study is registered with ClinicalTrials.gov, number NCT01723761. Findings: Participants were enrolled from April 1, 2011, to Sept 30, 2012, and follow-ups (completed on April 5, 2014) ranged from 637 to 1177 days (median 652 days). The incidence of episodes of ventricular tachycardia and ventricular fibrillation correlated significantly with PM2·5 (p<0·0001) but not PM10. An analysis of ventricular fibrillation episodes alone showed a significant increase in risk of higher PM2·5 (p=0·002) and PM10 values (p=0·0057). None of the gaseous pollutants were significantly linked to the occurrence of ventricular tachycardia or ventricular fibrillation. In a subgroup analysis of patients with or without a previous myocardial infarction, only the first showed a significant association between particulate matter and episodes of ventricular tachycardia or ventricular fibrillation. Interpretation: Particulate matter has acute pro-arrhythmic effects in a population of high-risk patients, which increase on exposure to fine particles and in patients who have experienced a previous myocardial infarction. The time sequence of the arrhythmic events suggests there is an underlying neurally mediated mechanism. From a clinical point of view, the results of our study should encourage physicians to also consider environmental risk when addressing the prevention of arrhythmic events, particularly in patients with coronary heart disease, advising them to avoid exposure to high levels of fine particulate matter.